Why do we need biolinks on the Mornington Peninsula?

The Mornington Peninsula is an iconic and beautiful region and is considered the most biodiverse 750 km2 in Victoria. Fragmentation of the landscape over time has led to the decline of many native birds and mammals. As native trees, shrubs, and grasslands have been cleared to make way for farms, residences, and infrastructure, mammals such as swamp wallabies, bandicoots, antechinus, echidna, and skinks have lost habitat and become vulnerable to feral cats and foxes. Many reptiles are also in decline due to loss of habitat and predation from introduced animals.

In order to be healthy, native landscapes must remain connected so that wildlife can move safely between areas of food and shelter. A landscape that is highly fragmented can trap animals in areas that are too small for their needs. Where understorey has been cleared, small mammals and birds that forage on the ground are vulnerable to predators such as cats, dogs and foxes, and their numbers decline rapidly. Those that escape predation may suffer from inbreeding (lack of genetic diversity) and their populations become vulnerable to diseases or sudden death due to disturbances such as pest outbreaks and high-intensity bushfires.

Biolinks are areas of bush and other habitat (such as waterways and stands of paddock trees) that connect areas of valuable habitat and forage. Biolinks enable wildlife to move freely and safely and have access to the broader landscape. This is increasingly important in light of climate change, as the requirement of animals to move to more suitable areas becomes critical.

Creating biolinks involves developing corridors of native vegetation on public and private property and/or (where possible) removing barriers such as electrified fences to allow for wildlife movement. A biolink can also be created by developing patches of bushland that act like ‘stepping stones’ for wildlife, reducing the distances between individual habitat patches. Some actions taken to create biolinks include weeding, planting, strategic fencing to keep out stock and feral animals and the building of underpasses and overpasses at roads to enable safe passage of wildlife. 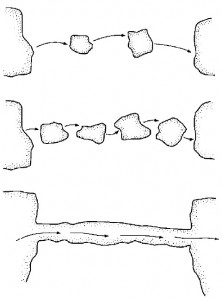 In a fragmented (partially cleared) landscape such as the Mornington Peninsula, biolinks to assist movement of animals can be can created by developing either (a) corridors to provide a continuous connection between habitat patches; or (b) and (c) patches of bushland that act like ‘stepping stones’ for wildlife, reducing the distances between individual habitat patches.

Source: Andrew Bennett, Linkages in the Landscape: The Role of Corridors and Connectivity in Wildlife Conservation, International Union for Conservation of Nature: Forest Conservation Programme, 2003.